Collaborative Design Group provided structural engineering and designed the restoration of the facade of the 28,000 sf historic building, former home of Burch Pharmacy. Included in the design was the addition of a new stairwell to the back of the building’s exterior to add an elevator and make the building ADA compliant. The addition provides a striking, noticeable feature that was designed intentionally to not look like it was part of the original building.

This building presented numerous surprises during the renovation, such as the discovery of elevator and coal shafts hidden behind walls. The existing boiler also presented a significant challenge due to its large size and the complexity of dismantling it. In the end, though, the $2.4 million renovation was completed on time and budget. The first floor and basement are now home to the Burch Steak and Pizza Bar. The redevelopment includes 12,000 sf of office space and 2,300 sf of retail space in a separate building called the Annex. 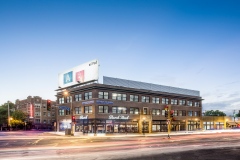 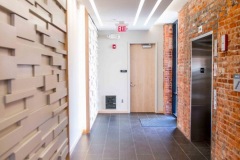 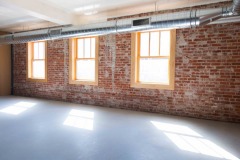 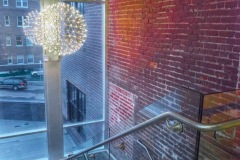